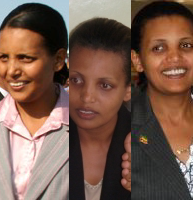 The incarceration of Birtukan Mideksa, the first female leader of a major Ethiopian political party, by the Woyane regime a week ago is a sad commentary on the state of politics in Ethiopia.

The regime, which is being forced to end its occupation of Somalia and is in the process of retreating, believes this action will distract attention from its defeat in Somalia while at the same time breaking the resolve of Ethiopians to demand freedom from tyranny. Tough luck. With Birtukan willing to go to jail, again, to defend the truth, Ethiopians may have found a leader with backbone and a steely determination to stand up to Meles.

burtukan mideksa is one of the infilteretors in to kinijit organization by presentig her self as the opposition to the tplf led regime in ethiopia.once in a position what and her group did to kinjit is a short time memory.this is a women when she has every opportunity to excepose the brutal woyanes crime againest the ethiopian people choose to say unbelivable thing in front of the HR.when asked how many prisoners are in ethiopia said hundred when infact the numbers were much much much higher in thousands.it hard to belive the woyanes are aresting birtukan there must be some game they want her to play one more time as she did before.who knows she might be the woyane agent who is working under disguise to weaken the ethiopian people struggle for democracy.god bless and the ethiopian people will prival.

Ananymous! Just put a sock in it!
Too late the genie is out of the bottle.

I guess Birtukan has perfected the art of infiltrating :)

We all have the freedom to say what we want, and make analysis on any idea we want. However, on everything we do, we must be guided by reason if we want to sale any part of our analysis to others. You have made more damage to the causes of democracy in Ethiopia than Burtukan whom you accused as a TPLF agent. It is not hard to believe that the Woyanes have arrested Burtukuan, what is really hard is to go through your 8 line writing and understand why you wasted your time on doing absolutely nothing!

the anonymous experessed his view the way he sees it it you have anything better to say MR MADEBO you are intaiteled to your opinion the way you see it.the point is not MR MADEBO how many page you wrote as this is not a writtng contest it is the view excepressed.it seems you put your self as more op[nionated person,if you will show sa how your long wrtting is better than the guy who expressed his views in eight line.

Well Mr. Anonymous your buddy Anonymous did not give you much laverage to defend him. Did he? In fact he left you dry and high.

Some conisprecy theory? Give me a brake! You and your buddy need to come up with some thing better than that.
Here your are are talking about Birtukan Mideksa, the first female leader of a major Ethiopian political party. A woman dedicated to The Cause. She is young, intelligent, smart, educated and don’t forget beautiful. Any body would kill to have a daughter like her. Wouldn’t you? I would. She is thrown to jail for her people.
So now Mr. Anonymous do not change the subject. The subject here is not Mr. Madebo. And for that Matter, Mr. Madebo is one of the true leaders of Ethiopia. So He is out of your league. Touch not Ethiopia’s True Leader.

Yes, he expressed his idea, and all I did was opposed his idea. Don’t you think when I opposed his idea; all I did was nothing but expressed my idea? None of us can negate a relative truth unless we all, or some of us have the evidence (supported by fact) to do so. The same Burtukuan that most Ethiopians adored as the Secretary of the now defunct CUDP is now the Chairwoman of UDJ. What is the basis to call her woyane infiltrator? Show me proof and convince me, otherwise, I will keep on hammering your unsubstantiated (gossip politics) statement and make it clear to others that you are wrong. Burukuan is what I believe she is, or she is what “anonymous” thinks she is. One of us must be wrong. Until “anonymous” comes with a clear and convincing fact supported idea, he is wrong! By the way, I don’t think you were close enough to know what I meant by “8” lines, it has nothing to do with size. The burden of knowing is on you because you already commented on it as if you knew!

Solidarity with Birtukan only if she will be part of Gadaa people's movement.

Gadaa people started to be smart, to think smart and to act smart in order to be the "smart power of the Horn" as Ms Clinton described the new America!. In order to promote Oromo liberation from Abesha domination system, Oromos should still learn to think globally and act locally. Thinking globally in our case meanse look at the BIG picture of Qabsoo Bilisummaa Oromo, whereas act locally meanse cooperate and coordinate each individual and institutional move of ours to serve the big picture.

Now the formation of OFC (Oromo Federalist Congress) is the big step towards the right direction. I personally believe that there are genuine Oromos in OPDO striving to keep the hitherto gains of our Qabsoo. Let us encourage them and differentiate them from non-Oromo forces in OPDO, who mainly fight against our Qabsoo. The consolidation of the Oromo opposition under OFC is very timely and mandatory.

Now we need a similar step to be taken by Liberation Fronts (the 3 OLFs, COPLF, FIDO, FIO and UOPLF) to forge similar unity under the beloved and original name OLF. It is non sense to see so many liberation fronts fragmented even though they all do have the same KAAYYO aka Bilisummaa Saba Oromo and Walabummaa Biyya Oromo. I hope these rebel liberation groups learn from OFC and come together to forge only one strong OLF.

Then having genuine Oromos in OPDO (let's call them ODM = Oromo Democratic Movement) as a keeper of the status quo, having OFC as a strong opposition to promote our Qabsoo per ballot and forging only one strong OLF which struggles for our Bilisummaa and Walabummaa per bullet is the best we can achieve in our liberation journey. At the end, the cooperation and coordination of the struggle of ODM, OFC and OLF is the best instrument we can have against the Abesha Domination Forces. Thank you OFC for being an example of Tokkummaa for Bilisummaa!!

Birtukuna went to jail for the freedom of all Ethiopians, not just for a part of Ethiopaia. She has already seen the bigger picture, and there is no bigger picture to her, me, and us than the polity we call Ethiopia!

I respectfully disagree with you on this post. I am very hesitant to be blinded by Birtukan as being one of our heroes.

She has hardly done anything, other than speak up to this government.

However, my friend, i believe we are dealing with politicians here, on both end, who are willing to do anything to further their cause and be on the spotlight.

I can forgive many things and even some circumstances are deserving of full explanation, however the pardon letter signed by Birtukan that resulted to her being released the first time around is simply inexcusable.

She might be regretful now and she is probably willing to undo what she has done, but in the end there were 193 including youth that were gunned down to further Birtukan and her clique's cause.

The inscapable fact remains, she had signed an inexcusable and damning piece of paper that would probably remain irreversible. But to have the audacity to say otherwise in the interview she had done abroad, is probably an effort to reverse a regrettable decision, but also one that gave the government the access to detain her again.

does the government have the irght to detain her? YES. Did she give them that opportunity? YES. Does our government has a transparent justice system? HELL NO.

In the end, i blame them all. To me one is not better than the other.

Of course, i am an independent thinker and one who is capable of dissecting, not only their decisions and the hard facts, but also their intentions.

We must all remain vigilant to constantly question their intentions.

The female politician thing is something that gets old quick and one can hardly capitalize on the sheer fact of the "first" female, blind, crippled or whatever.

Character would come into question in the end, and i still have my doubts about Birtukan, if that is acceptable to say, these days.

Can other Oromos have a solidarity with this lady? Thanks to Ob Bulcha and Dr. Merera for a far sighted step to forge OFC (Oromo Federalist Congress). The only instrument we Oromos need to be liberated is TOKKUMMAA! As we all know our enemy is not only Weyane, but also its supporters (some Amharas who do fear QBO, USA-government, EU-poleticians and AU-dictators who do want to see Ethiopia intact).

Specially USA, EU and AU support Abeshas for they want to have Ethiopia as bull against Islam world. Weyanes could successfully convince them that Oromos are in majority Moslem, who may act against their interest. Here is the point where Ad Birtukan is needed as an instrument.

Now to tacle all these obstacles in a liberation movement of Oromos, both TOKKUMMAA Oromo and being dedicated to FEDERALISM (to show the West that Oromos are not necessarily against their interest) are important. OFC has got this agenda rightly managed. I know OLF is not as "separatist" as the Weyane tries to sell to the West, but unfortunately it is devided in to many factions (COPLF, Jijirama, Qaacaa, Shane, FIDO, FIO and UOPLF) to lead us to success.

The step taken by OFC is specially very symbolic for us to forge Tokummaa for Bilisummaa, be it with in Ethiopian Union or with out Ethiopian Union. I hope Weyane will not hinder this coalition using its election board. Anyways the attempt is nice and examplary!!!

Could you please educate us about the concepts of Tokummaa and Bilisummaa? Thanks.

You can slice and dice her motives as you wish but for us Burtukan Mideks’s life is like a candle, which burns itself to give light to others. She is showing us how to walk the walk not only the talk.

“ I am very hesitant to be blinded by Birtukan as being one of our heroes.”

O! Well! Mr. independent thinker blaming every body, you are already blinded by your loyality and love to your hero Melese. It seems that you are talking out of both sides of your mouth, if that is acceptable to say, these days.

People who live in glass houses should not throw stones.